Election Day is November 3rd!  Do you know about the Biden and Trump tax plans?

Pop culture icons are even weighing in on Biden’s and Trump’s tax plans.  The rapper 50 Cent has said he supports the Trump tax plan because he “doesn’t want to be 20 Cent.” Whereas, Dwayne “The Rock” Johnson is supporting Biden’s platform.  In any event, taxpayers need to be informed to plan and prepare for each tax proposal.

Tax Cuts and Jobs Act (TCJA) that President Trump enacted in December 2017 reduced tax rates for individuals, businesses, and estates. Corporate tax rates were reduced from 35% to 21%, and the top individual tax rate slightly decreased from 39.6% to 37%.  These cuts are set to expire by 2026.

The Trump plan is to extend the provisions of the TCJA beyond their scheduled expiration and maintain the top rate at 37% for top earners and the 20% deduction for pass-through owners.

Under Trump’s plan, the TCJA will retain the $11.58 million per person and $23.16 million per couple estate-tax exemption without incurring estate tax. The step-up in cost basis at death would be maintained.

The executive order issued on August 8, 2020, by President Trump offered additional relief to working taxpayers.  This order gave employees the choice to defer the payment of 6.2% employee portion of Social Security taxes to 2021.  Trump’s tax proposal is to forgive the tax entirely rather than deferring the payment.

Democratic presidential candidate Joe Biden is proposing many significant changes of his own to the tax code.

Restoration of the Pease limitation on itemized deductions for those with income above $400,000. The itemized deductions for these earners would be limited to 28% of income, and capital gains rates would increase from 20% to 39.6%. A phase-out of Section 199A deduction is also included for high earners; the top effective rate on pass-through entities is currently 29.6%. For taxpayers earning more than $1 million, the capital gains tax would increase to 43.4 percent from the current top rate of 23.8 percent.

Other special individual tax incentives of the Biden plan include student loan forgiveness and renewable energy-related tax credits.  First-Time Homebuyers’ Tax Credit would be renewed, providing up to $15,000 for first-time homebuyers.  There would also be the introduction of a new 26 percent tax credit to match traditional retirement contributions.  This would be as a replacement for the deductibility of those contributions.

Other tax considerations include a credit to reduce rent and utilities to 30 percent of income, expand Earned Income Tax Credit (EITC) for those older than 65, a $5,000 tax credit for informal caregivers, and expand the Low-Income Housing Tax Credit (LIHTC).

The Biden plan increases corporate tax rates from 21% to 28%. Biden’s plan does propose retaining the TCJA’s revenue raisers, particularly the use of net operating losses (NOLs), limitations on business interest deductions, and amortizing research and development expenses.  Additionally, this plan wants to impose a 15 percent minimum tax on large businesses with $100 million or more in income.  There is also a doubling of the tax on foreign subsidiary international profits to 21 percent from 10.5 percent.

The Biden plan would make the New Markets Tax Credit permanent in distressed communities.  The hope of offering these credits to small businesses is to encourage workplace retirement savings accounts and adopt renewable-energy alternatives. 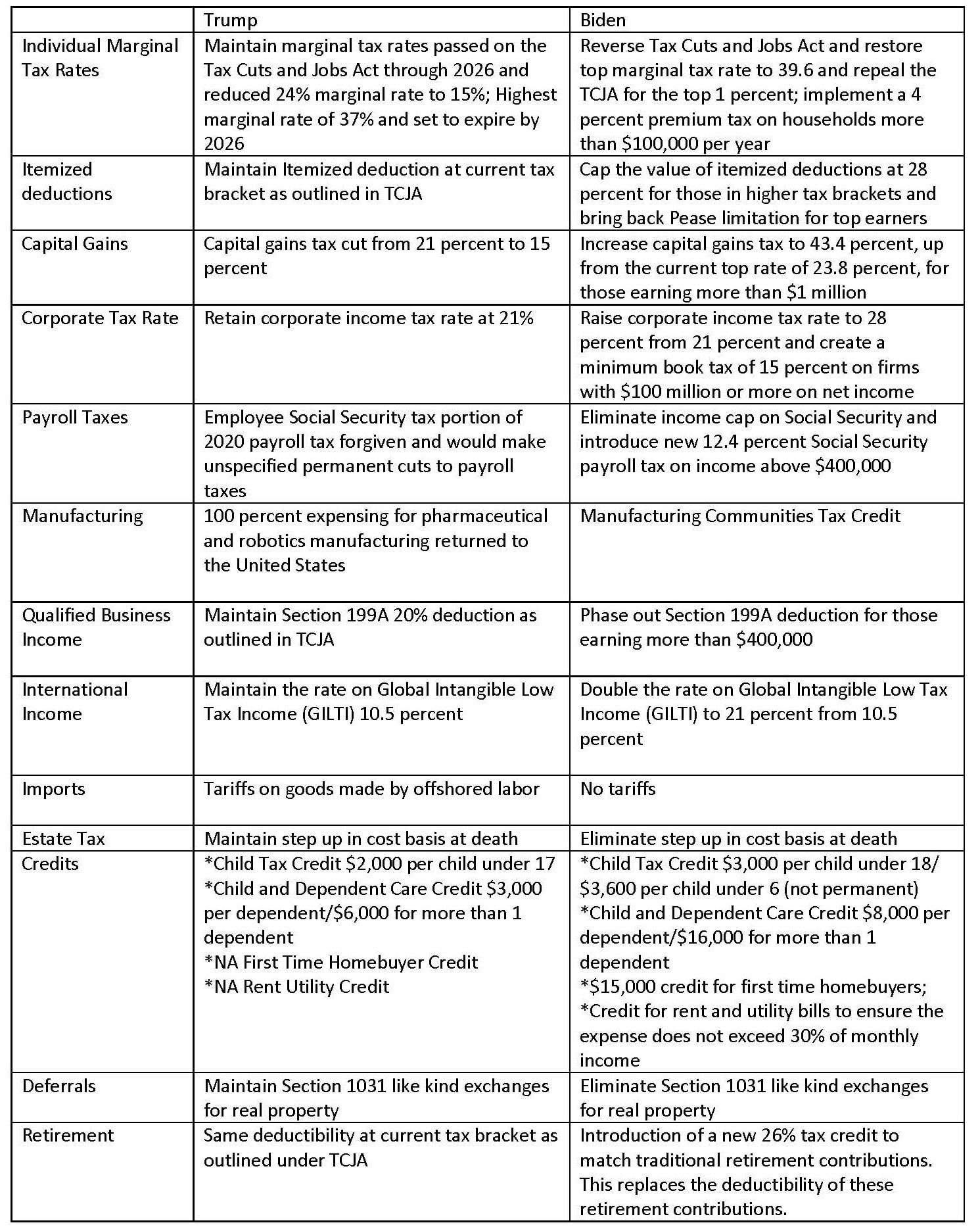 Stay tuned for year-end planning suggestions to help you be in the best position in the fourth quarter of 2020.

Maria is a partner at Wilke & Associates servicing closely-held businesses in manufacturing, real estate, transportation/logistics, and technology industries as well as high net worth individuals and executives in delivering effective tax strategies.